I must say that when I decide to talk about traditional recipes, I automatically start with a series of premises that seem more like a red light than anything else, but that they are not.

My premises are never born with the intent to scare but simply with the sole function of putting you in front of the facts and the facts in this case are two: the sfogliatelle are difficult both to make and to tell, but they are tremendously delicious, so it will be worth the worth trying to make them.

I will try, below, to give you some advice that I have found decisive to obtain sfogliatelle that will have nothing to regret to the Neapolitan ones (then obviously, if we could eat them in Naples it would be a whole other story, but these days it is good to learn to travel first with the imagination than by other means!).

In short, it was like a year that I tried to make the sfogliatelle or at least I had the idea of ​​wanting to make them but now for one thing, now for another, I have never succeeded.

On a super messed up day (yes, because I don’t choose to do simple things on quiet days, no sir!) I said to myself: if this time I can, it means that the recipe is really the right one.

I started looking at different recipes and among these I found those who use honey in the dough, some not, some orange blossom essence, some not. So I took courage and decided that my sfogliatelle would have orange paste and candied orange inside, they would not have honey in the dough but a hint of cinnamon in the filling.

For them to be considered real sfogliatelle, ricotta must be the real focus of the game. You need a fairly tasty ricotta, cow or sheep’s milk, which has a not too hard and not too soft texture, but is nice firm and above all FRESH. If you decide to make excellent sfogliatelle, buy the ricotta the day before and, if it is still too rich in whey, put it to drain so that the excess liquids come out and it does not remain too soft. This little foresight will help in the realization of the filling which will then have the right consistency.

In this recipe the semolina is needed to give the filling the right consistency. Do not omit it and above all, if you do not have it, replace it with semolina instead. The filling of the sfogliatelle must be full-bodied and firm and only thanks to the cooked semolina, will it be able to become such.

This is a detail that should not be underestimated as it is essential to ensure that the dough becomes very elastic and does not break during the peeling phase. After having kneaded it, therefore, and worked relatively little, always let it rest for at least 1 hour at room temperature so that the gluten mesh that still forms will make the dough workable later. The second fundamental resting phase is the one after the molding of the log: letting it rest in the freezer or fridge will help to consolidate everything, making the lard become hard again and therefore the corks are then well workable. You will be able, without doing too much damage, to form your shell without too many problems! Do not speed up the times, have patience and a good part of the work will come by itself!

The sfogliatelle are not achievable without lard. I am sorry to discourage those who will not be able to find it but the lard cannot be replaced with butter or at least, it will not have the same yield. You can also decide to do it but the taste will be noticeably different and absolutely the pastry will not be the same way (I guarantee it after my failure!) So equip yourself with lard, you can find it in many supermarkets. The lard to be used will be the white one. The consistency of use must be soft but not liquid, to understand, like the consistency of a hand cream!

Use it without hesitation. Do not sip its use, especially at the time of peeling, this will allow the layers of dough to slide well together, not to stick and will be essential in the shaping phase of the sfogliatelle shells. 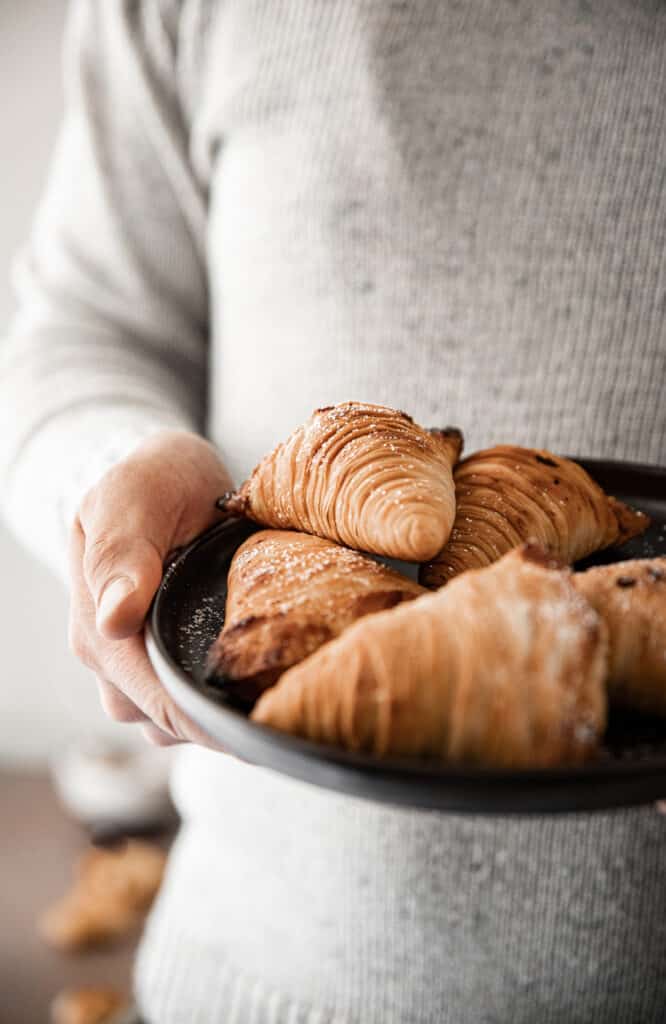 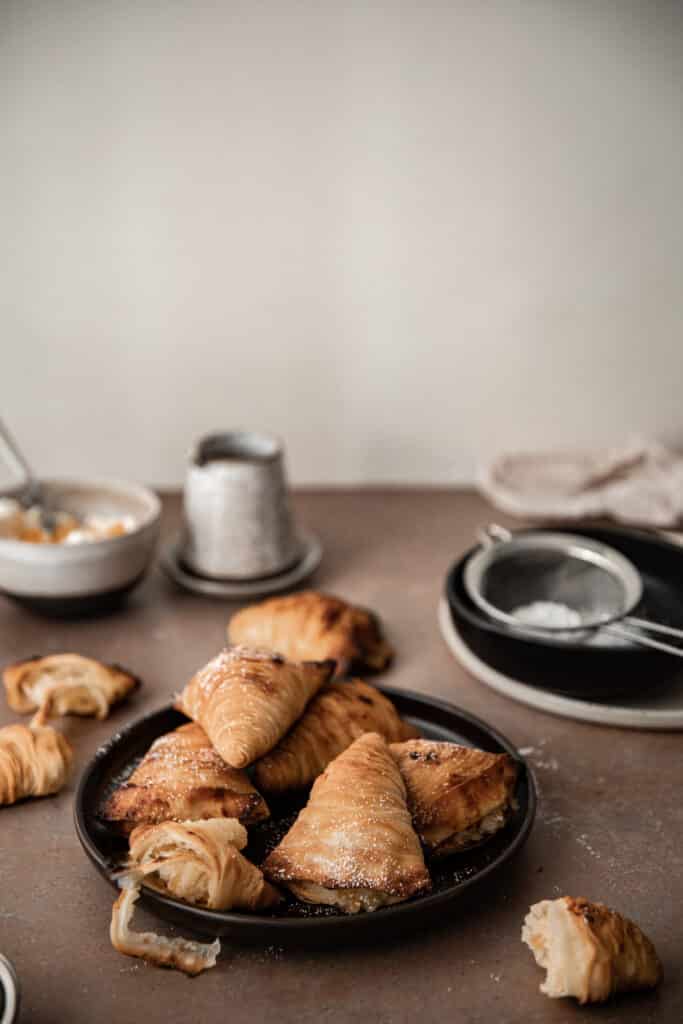 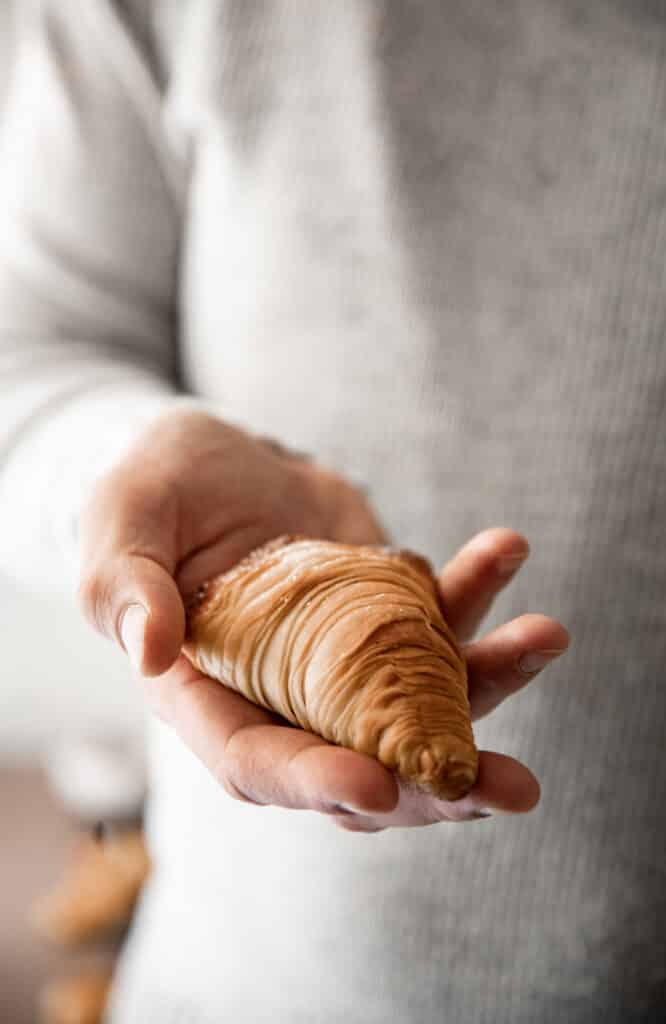 * sheep ricotta can also be used, in case you want to obtain a more intense flavor.

* if you do not have orange paste, you can prepare it by blending 100 g of candied orange and 40 g of honey in a blender. You can keep it in the fridge for weeks. 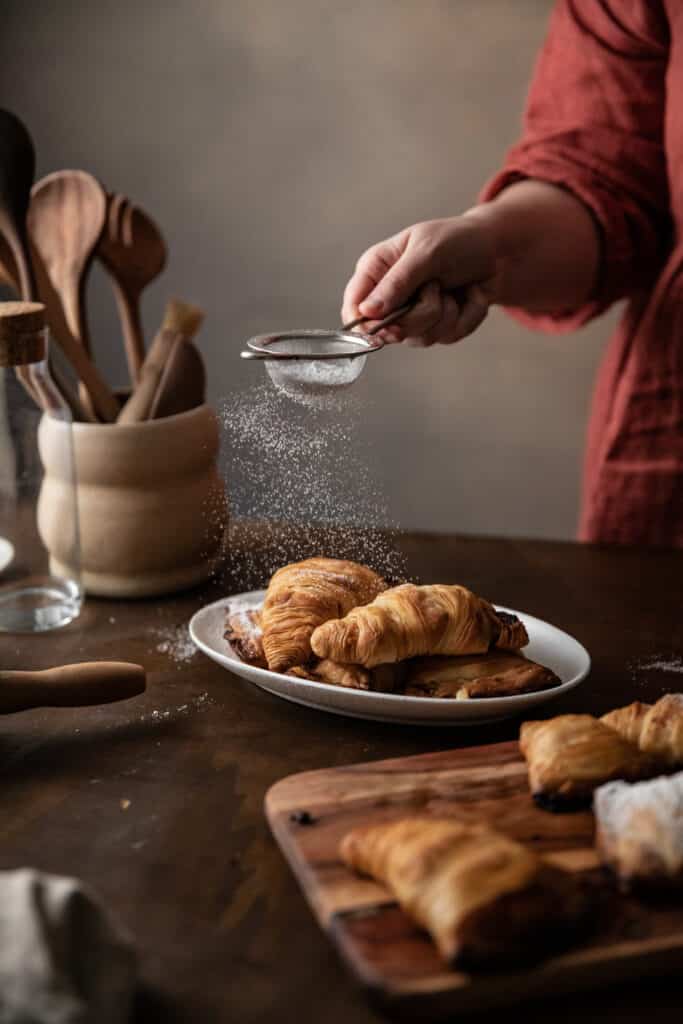 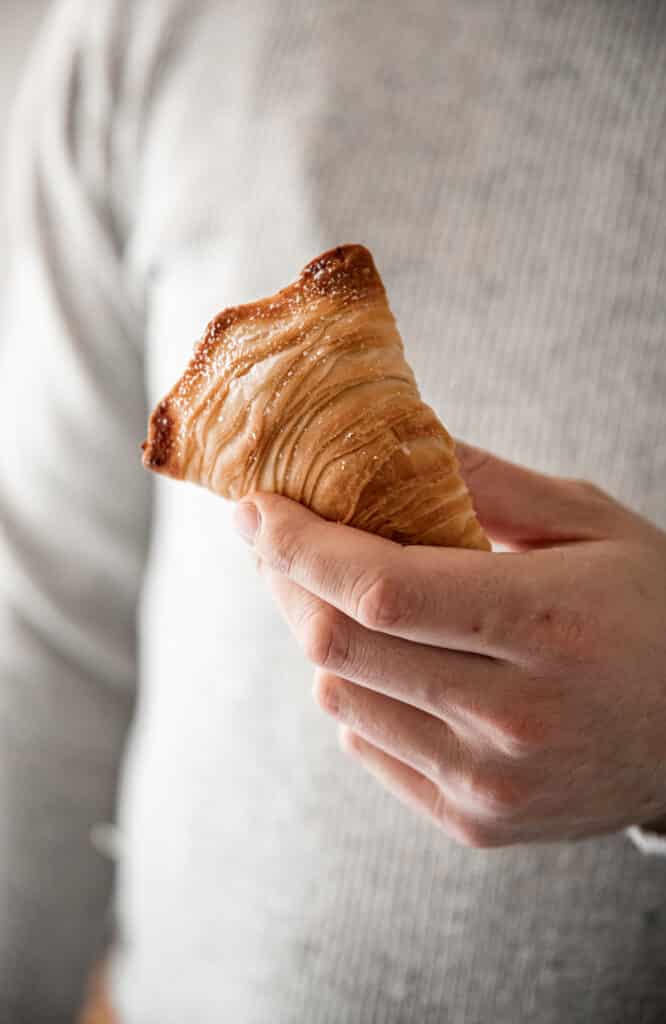 Prepare the filling the day before. This will need to be prepared in two stages: the first stage will involve cooking the semolina. Put the water and all the semolina in a pot and start mixing everything well and cook over low heat for about 20 minutes, until completely dry. It should become very similar to the consistency of polenta, firm and dry. When it is ready, put it in a bowl and let it cool well.

When the semolina has cooled down, in a planetary mixer, with the leaf hook, pour the semolina and ricotta, in two stages. Add the sugar, orange paste, cinnamon and vanilla. Mix everything well for a few minutes until the mixture is smooth and homogeneous.At the end add the candied orange cubes. Put everything in a bowl, covered with cling film and store in the fridge until the next day for use.

MIX PREPARATION OF SFOGLIATELLE AND TRONCHETTO

The next day, start in the morning to prepare the sfogliatelle dough: they will require a few hours of rest and therefore it is good to move forward with the times.

Mount the dough hook in the mixer. Pour in the flour, salt, sugar and water.

Start the machine and start kneading the dough. You will realize that you will get a very dry and jagged dough. Don’t worry, it’s not a problem: the dough will need to rest to reach the right consistency. When you have finished mixing, pour the compost on a work surface and compact well with your hands, to form a rectangle that you will roll up in cling film. Let it rest for 1 hour at room temperature.

After the resting time of the dough block, you will find that the dough will have formed the gluten useful to make this dough stretchable. Divide the dough into 4 pieces and equip yourself with a dough sheeter. Slowly begin to roll out your dough starting from the maximum thickness up to the thinnest thickness. The dough will gradually become thinner and slightly velvety, if you work it with care and patience.

Before proceeding to the last peeling, which will be the thinnest one, lightly grease the pastry with the soft lard and proceed to leaf through delicately. At this point you will have to wrap the pastry with a rolling pin. Proceed in the same way with the subsequent pieces of pastry making sure to grease them with lard before rolling them with a rolling pin, to prevent them from sticking together.

Place the rolling pin on two supports and when you have finished wrapping these sheets with a rolling pin, begin to unroll them towards you a little at a time, greasing them again with the lard, widening it slightly without breaking it and rolling it well on itself to form, layer by layer , a very compact log.

Sprinkle the log well with the lard, roll up with cling film and place in the freezer for 3 hours or in the fridge until the next day. I usually put it in the freezer and the result is great!

Spend 3 hours in the freezer, take the log and cut into 1 cm thick slices. These will be called caps. You will get about 10-12 for these doses and from each of them you will get a shell for the sfogliatelle.

Take one cap at a time and with both hands, swirl it by pressing gently in the center so as to slide the layers of pastry and form a sort of hat or concave shell.

I leave you here the link of a video, in my opinion very explanatory of the sfogliatelle forming technique.

Once you have formed the shell of the sfogliatelle, fill them with plenty of filling and place them on a baking sheet covered with parchment paper. While forming the others, put the previous ones to rest in the fridge, in a pan, so that they keep their shape.
When you have finished forming all the sfogliatelle, heat the oven to 200 ° C, ventilated mode, and when it is hot, put the sfogliatelle in the oven and cook for 20-22 minutes. They must be well browned.

When they are well cooked, take them out of the oven and place on a wire rack to cool. When they have cooled slightly, sprinkle with powdered sugar and enjoy!