Okay, okay, I’m lagging behind on the publication roadmap, as I have yet to publish about 4 new recipes. In my defense, however, I tell you that here we have resumed at full speed (very full, I would say! Fortunately, I would add!) As soon as possible.

Baking, however, remains a daily constant, as it always has been and we continue to produce those who want to be all the breads that we want to try and taste, experiment and then communicate to all of you.

But back to us, this is the recipe for baguettes that we tried to make with Claudiu, which you already talked about two weeks ago, about!

I think it is not the usual baguette recipe, but it is a version that we like very much: crumbly, well hydrated, honeycombed and very light! Not that the alveolation has been completely defined its goodness, but these are so crumbly that they melt in the mouth and with a nice slice of mortadella, mmmmmm …….. can I continue? 🙂

The more attentive will be able to say “Baguettes don’t have to be alveolated”, “baguettes require chariot”. I KNOW I KNOW! But, well guys, what should I tell you? try this version and you will let me know if they won’t steal your heart! In addition I have included some notes for anyone who wants to produce baguettes with brewer’s yeast and direct method (I won’t talk about chariots and poolish, so it will be really easy to get them: you will only have to have a little patience for the leavening, but since one is nocturnal there should be no problems whatsoever!), therefore, you just cannot refrain from trying them and from telling me your opinion!

I have never been to Paris, in fact I have never been to France and I don’t know what it’s like to walk with a baguette under the armpit through the romantic streets of this wonderful place (hahahahahaha, they say it’s used like this). But for me, all of this is extremely romantic. And for romantic I refer to the moment of the dough, its leavening, in seeing the change of the dough and then forming it as best you can!

So this time no sentimental speeches, no thoughts, no serious reflections: just a nice recipe you can use to create baguettes that you can stuff as you see fit! 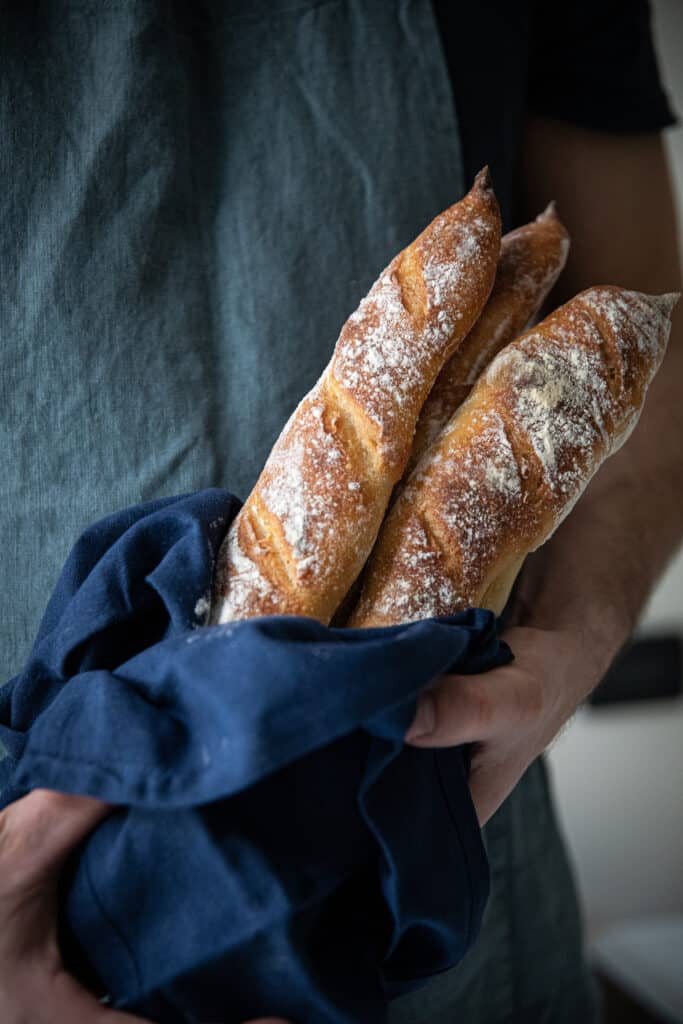 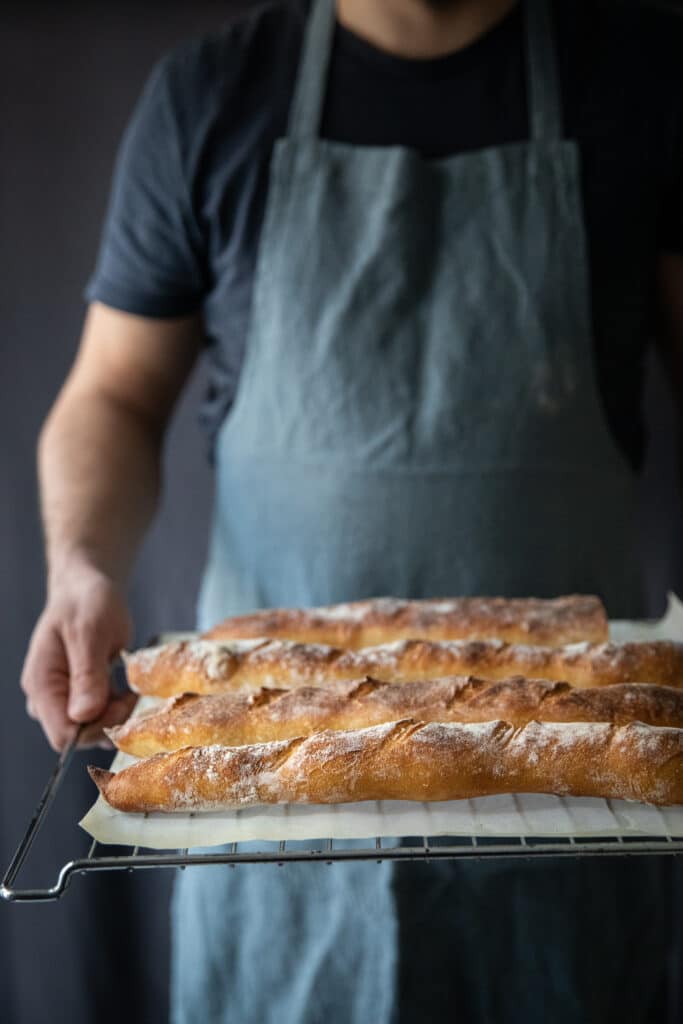 * We have also experimented with brewer’s yeast and to be in line with the times indicated in the recipe and with the flour we have used, if you want to use beer yeast, I recommend using 1 g. Always consider that according to the flour you will use, it will be possible to change the amount of leavening hours and the amount of water to be used. 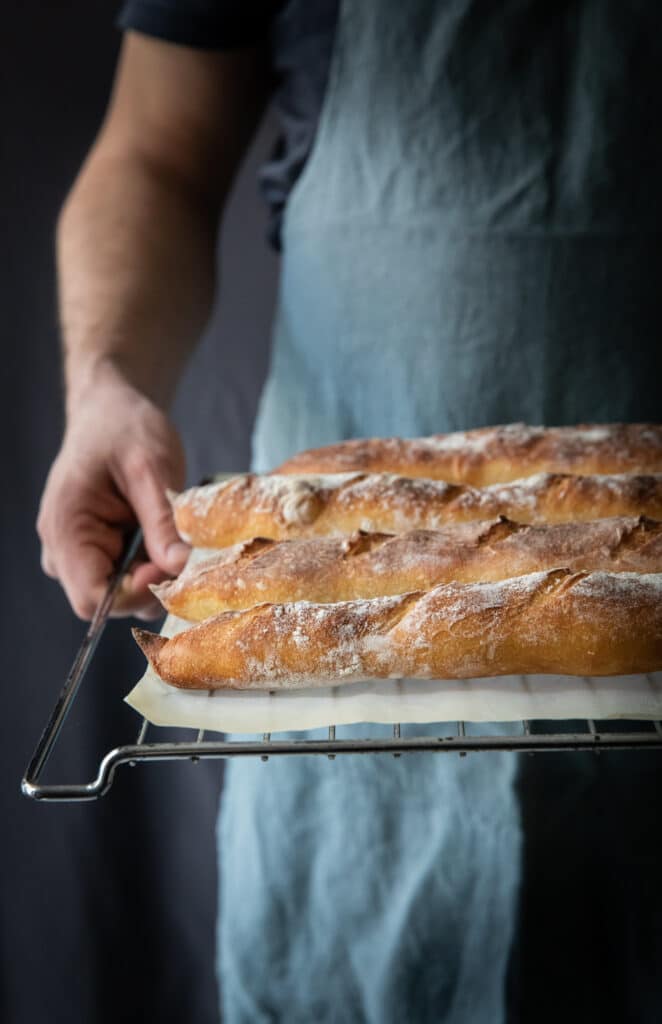 In the bowl of the mixer add 60% of the total water (the remaining part keep it aside because we will insert it during the final dough) and all the flour and mix for about 2 minutes, at low speed (speed 1), until all the flour will be completely moist. Leave to rest for 30 ‘.

In the bowl, add the rest of the water mixed with Li.Co.Li and start mixing until the dough is almost completely strung. Only at the end add the salt and string the dough completely. It will take about 6-7 minutes to string completely.

If you find it difficult to string the dough into a planetary mixer, I recommend you work the dough on a surface by making a few French folds until the gluten has developed.

At this point, you can transfer the dough into a bowl and start with the spot welding phase.

During this phase, every 30 ‘proceed with stretch & fold folds, or any type of reinforcement fold you know how to do. Make three sets of folds and then transfer the dough into a hermetically sealed bowl with cling film and refrigerate for 14 hours (approximately).

As I wrote above, the leavening hours can vary according to many factors: strength of your yeast, temperature of your fridge, quantity of yeast used, type of flour used. In any case, the dough will be ready when it has almost doubled in volume.

Overnight leavening in the fridge

Leave in the fridge overnight to rise, the next day you will see that the dough will almost double in volume.

Let the dough acclimatize, out of the fridge, as soon as the leavening hours have passed, for about two hours. After that proceed to the size of the dough. We have chosen to divide our dough into pieces of about 150 grams, due to the size of the oven (but you can also choose to make 200 g if you prefer larger baguettes).

At this point, proceed with the forming of the baguettes. I leave you a small video to understand how to make baguettes!

Once the baguettes are formed, take a nice large cotton (or linen) tea towel, which has not been washed with fabric softeners, so that the bread does not smell the fabric, and place them not too close together. At this stage I recommend you cut pieces of parchment paper, dusted with re-milled semolina, which you will put under the baguettes to ensure that when you have to pass them in the pan they will not be damaged.

I leave you a photo (even if not the best!) To understand how to place the tea towel. Cover them with another cloth and let rise for about 1 hour.

Preheat the oven to 250 degrees, about an hour before cooking. The oven must be hot. Add a small pan of water to the bottom of the oven to create steam. We have also heated the pan in the oven, having no refractory stone, we have found this “alternative solution”.
When an hour has passed, take the pan out of the oven, take the ends of the parchment paper placed under the baguettes and transfer the baguettes to the pan as quickly as possible.

Make cuts on the baguettes following a vertical direction, to make them open better.

Bake and cook for about 15 minutes .After the first 15 minutes remove the pan with water and cook for another 10 minutes. We prefer not to cook them too long because they could dry out excessively. If you make larger pieces (200g – 250g) you can cook for 5 minutes more during the phase with humidity.

Cool on a wire rack, cut only when they are cold (if you can resist !!! hahhaha)